I wrote a song about my wife, mother, sister and nieces.  All the important ladies...

So, below is another odd recording...a dance mix version of a Nickelback song I recorded MANY years ago.  I know you're thinking, "Nickelback?!  LAME!  Why would you do that?"

Well, it was a decent-paying gig, that's why.  This guy who was a friend of a friend redid rock songs into dance mixes and sold them to gyms.  He called, I took the gig.  Who knows, you may have worked out to me singing Nickelback.  So who's lame now?  Yes, still me.  But you want to know another thing?  I kind of like Nickelback.  There.  I said it.

For BAILEYS LIVE ACOUSTIC booking information, fill out the form below.

Welcome to the new website!  Much of it is still under construction, and I'm admittedly very new at this, but I managed to figure out how to post a recording of the first song I ever wrote, which you can hear below.   It doesn't feature my wife (who undeniably is the real reason people come to our gigs), but it is a simple song about a man I honestly know very little about.

I have to give a special thanks to my friend, Dustin Fisher, who was kind enough to spend an evening indulging me and recording my half-baked efforts at songwriting.  He also did the solos in between my "singing."

Thank you for contacting us! If needed, you will hear back within 48-72 hours. 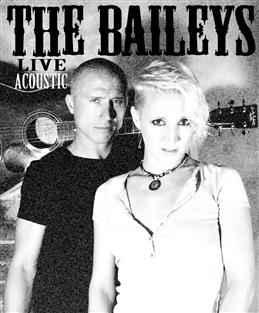 ​OR FILL OUT THE FORM BELOW